Click here to leave a review on Barnes & Noble

“An absolute joy of a read. I think more so because of Grace’s journey from not quite sure, to fully realised was wonderful to read. I know that there are some authors that specifically write so their books can’t be placed ‘in a time’ but I love that Culbertson makes it super clear when her books were written with a million and one pop culture references that make the characters come alive for me.

I think the relationship Grace has with her mum was one of the lynchpins of this novel and while I can take or leave family type things, I thought this was handled really sensitively and not a ‘family is everything’ type thing. I’m wondering if there will be a love triangle (I’m here for it if so!) AND dear gods the diversity in this stories is always great! And the way faith is tackled is really well done as well. Ahh excited for the 2nd one already!”

Another page turner from Geanna Culbertson!!

“Geanna does it again! Another amazingly original story with a strong female main character that we need more of! My daughter was genuinely sad to finish the book, more please!!”

“Grace, being pure of soul doesn’t mean any of those things. Purity and goodness aren’t about being flawless or beloved; they’re about acting in the name of virtue even if it isn’t easy or popular. Sometimes, that even means looking like the bad guy or putting yourself in harm’s way.”

When Grace Cardiff is found dead after a car crash with her mother, she isn’t turned into a ghost. Nor erased out of existence. She is assigned as the Guardian Angel and protects her charge – a teenage boy called Henry Sun, who could potentially impact the world greatly, if he isn’t dead. With the serious identity and family crisis, can Grace defend Henry against different blows?

The author again has impressed the readers with this new book. Falling in love with the book, I am riveted by the book’s ingenious world and its properties, strong and realistic characters, enthralling plot, suspense and exciting cliffhangers, and inspirational messages. I am totally invested in the series and cannot wait to read the next book.

I love the world this time the author is toying with – afterlife. Heaven, Purgatory (Middleground) and Hell are tricky areas to write with, but I am blown away by how the author excelled in building her own world. The sight of Heaven is gorgeous as Hell is horrible. The Soul Pulse, halo, Wonder countless others are creative and amazing ideas. The idea of Guardian Angels is ingenious – plus the plot twists following that. I look forward to the significance of the number that Grace is referred to. I cannot wait to spend more time in this divine world.

I was captivated by the complex and endearing characters in the book. The story is less female dominated, in which I can see more male characters such as Leo, Monkonjae, Henry, Oliver and so on. The protagonist is flawed and realistic, who is relatable and admirable. Grace Cardiff can be insecure and weighed down by expectations, but at the same time she is honest, resourceful, noble, sassy and passionate (or aggressive). She grows and improves, and that is what I look up to and appreciate. Since it is still the first book in the series, I cannot wait to see the character development in the future. All the characters are great and I look forward to learning about, with and from them.

I especially enjoyed the entrancing plot, starting from the breaking news of death and Guardian Angel assignment, identity and relationship crisis, plus the threat from antagonists. I am glued to the book and read it on the edge of my seat constantly. The intertwined fates of Henry, Dr Wang, Naomi Joseph remain exciting and unsettled as well as their three guardian angels. The suspense is unparalleled and I am dying to read the next book. The bomb the author dropped right in the end only made the waiting time pleasantly insufferable.

I feel that the author is extremely strong in delivering her messages. Although the themes are slightly different, the story is full of soul and wisdom. I am motivated and inspired by the story and its characters. Grace is the protagonist of the story and she has her weaknesses. She has a lot of self doubt and is unnerved by the long list of expectations. But she doesn’t back down. She strives to improve and become stronger. I admire her strengths and her qualities encourage readers to grow just like her. I am enthused by the fact that it takes afterlife to teach humanity about living and life – the heartfelt messages are pure awesomeness.

Moving on, I passionately encourage everyone to read Heaven’t You Heard? – The book is a sight for sore eyes and I hope my reasoning has successfully talked you into reading this book. I highly recommend people from all walks of life and all ages to savour the awesomeness of the book and be captivated by it. Reading enthusiasts of all genres will be thoroughly compelled by the book. Although the book blurb compares the book with the brainchild of The Good Place and Good Omens in Shadowhunters universe, I strongly believe the book is unrivalled. Well-written and inspiring, this book is undoubtedly a must-read among all people.

I sincerely hope that you will pick up Heaven’t You Heard? after reading this book review. It is my utmost wish that you will be captivated by the greatness of the book and love it as much as I do. It is gorgeously one of a kind and awe-inspiring. I would like to express my sincerest thanks to the author for writing this book. Your inspiring charm is unmatched.

“I know humanity has a ton of flaws, but despite the madness and cruelty and foolish conflict, our world is beautiful and human beings have the potential to shine as brightly as any light in Heaven. I fight for them.”

“This is the third book I’ve read by this author, and like the others I’ve read, I quite enjoyed this book. There are many other books published by this author, but all of the rest of them have been part of the same series. So, to cut myself short: read first book in that Crisanta Knight series, then the stand-alone The Present.

Crisanta Knight series, at least the first book, involves young adults in a fantasy world that involves them attending a school so they’d eventually become protagonists in fairy tales (more or less, I mean, at least two of the main characters are “legacies”, daughters or sisters of fairy tale characters – Snow White & Little Red Riding Hood).

The Present involves a young woman working with a team that have been assigned Scrooges to see if they can turn the Scrooges lives around.

This book here, Haven’t You Heard, combines elements of both books in that it involves a young adult (i.e., a teenager around 16) and a ghost (the main character in The Present is a 20-something ghost going on 120-something). This book opens with the main character, 17 year old Grace Cardiff, in a car with her mother – in the middle of an argument. During which they have a minor little crash . . . wherein both died.

Grace is “shaken awake”, so to speak, to find herself no longer in that car. Next to a mentor. She’s in heaven, and has such a pure good spirit, 98% good, that she’s going to almost immediately be turned back around and sent back to earth – to work as a guardian angel. Naturally . . . Grace feels like she is in “The Good Place” (she makes a ton of references to pop culture, and builds friendships with others, dead and alive, based on pop culture), because she never felt like she was 98% good. Heck, with all the trouble she’s gotten into at school and with her mother, she can’t possibly be, say, even at 51% good. Unlike Eleanor Shellstrop, Grace immediately points out that there must be some mistake. She’s not 98% good. The mentor type says that, nope, Grace Cardiff – the one in front of her, not someone with the same name or looks, or whatever, is the 98% person. Right, so – that becomes their nickname in heaven, 98% (“there’s 98%!”).

Book follows Grace and two other brand new Guardian Angels as they guard their charges. Okay, I knew this was wrong even as I was typing. Book follows Grace. But there are two other new guardian angels she trains with and who she befriends. So. Whatever you might think of when you think of “Guardian Angel”, here that means that Grace joins her …. English has just escaped me. Charge? Client? Target? Person she’s guarding in high school. Befriends him and his gang of friends. Defends him against stuff, etc.

Meanwhile, naturally, Grace has to deal with being dead (being detached from her father and sister), with being dead with her mother, and other stuff. The mother stuff is complicated. See, unmentioned yet is that heaven works a certain way, I’ll only note: depending on different factors, a specific individual could spend 24/7 in hell, 24/7 in heaven, or, more likely, some mixture of heaven, hell, and middle. Grace’s mother has a day in hell, something like five days in middle (a moderate bland place), and a day in heaven. Grace, herself, spends time in heaven, hell, and earth. But only because she’s a guardian angel and has access to it all (though I don’t recall her ever visiting middle). Or, more accurately, she’s one of those 24/7 in heaven people.

“I absolutely loved this book and hates putting it down…but everyone needs a little sleep. My favorite part of this book would have to be the world building..everything was so descriptive and detailed that I had no issues imagining it in my mind. The characters were amazing too…but I have no qualms saying that I do not like Solange at all. This is a book that I would recommend to everyone!!!”

“Okay, this is a chonk of a book at 600 pages, but I flew through it. Grace Cardiff, only 17, and her mom passed away in a car accident. Grace finds herself in Heaven in the presence of Akari, the senior Guardian Angel. Of course, Grace asks where her mom is, only to find her mom stuck in Middleground. But at least she can magic “facetime” her.

Grace is given the job as a Guardian Angel, and her charge is a teenage boy named Henry Sun. Grace must go back to high school to keep an eye on Henry. Not only from earthly dangers but demons as well. Yeah, it’s those demons you need to watch out for. 😉

I can’t possibly fit all the great, diverse characters, as well as the fun aspects of the after-life, into this review. So please take my word that you will be delighted at every turn. I mean, Akari has a pet angel panda, and Grace’s mom is mad that Middleground doesn’t have Splenda. Seriously though, this is so entertaining, and I love that Grace has a second at life and maybe love… even after death. I’m looking forward to reading book two” 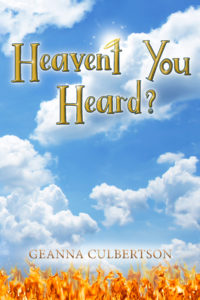